Amsterdam Drone Week is getting ready to show two innovative flying machines designed and created by students from TU Delft University. Both are single-person aerial vehicles that look like flying motorbikes. Both futuristic vehicles are also creating waves in the international media as they are compact, quiet, and electrical. Startups Talaria and Silverwing will give visitors a glimpse of what Personal Air Mobility will look like in future.

In recent months, a team of over 30 students from the Talaria startup worked overtime to complete their electrically powered aerial vehicle. Their Hermes II prototype is now ready and will be shown to the public for the first time at Amsterdam Drone Week. The flying machine is 2 m tall and the diameter of the rotors is approximately 2.6 m. Alexander Essle, one of the students: ‘This first prototype is intended to function as a single-person flying machine. The ultimate goal is to have it fly fully autonomously’. The Hermes II looks something like a cross between a motorbike and a helicopter.

Modular
A unique feature of the vehicle is its modular design, which means that the components are exchangeable according to Essle, making it suitable for a wide range of applications. He suspects that, as soon as new European regulations have been introduced and more options become available for flying drones, major companies will come knocking on their door. He also sees possibilities for using it to transport persons in inaccessible terrain such as dense jungles and mountainous areas. ‘In São Paulo, helicopters are already being used to transport persons from one part of the city to another. Our Hermes II can do this much more efficiently and effectively.’

In Europe, which is densely populated with people and infrastructure, he sees potential in the cargo transport market. ‘If you now want to transport a cargo of between 500 and 1000 kg by air, you have to pay a lot of money for a pilot. As drones are pilotless, we see a huge opportunity there. But it also means that we need to build bigger drones.’ Essle suspects that this type of transport will become mainstream within a few decades.

Extreme power
The Silverwing S1 is the brainchild of a different TU Delft team: Silverwing. The team recently completed its first test flights with a full-scale prototype. Designed to fly over 40 kms and carry a person, the S1 is one of the most innovative personal aircraft in the industry, according to spokesperson Bernd Rietberg. The design is a hybrid between a single-person aeroplane and a helicopter. ‘When flying it, you feel like you’re riding a flying motorcycle – with the power of a rocket. And it can land in your back garden.’ The flying machine lands and takes off vertically. After take-off, it transitions to horizontal flight for high efficiency transport. And it does it all autonomously.

Rietberg foresees a wide range of potential applications. ‘The cargo transport sector in particular looks very promising, for example in the offshore and disaster relief sectors. It can be used to transport critical components quickly and efficiently, for example. We are seeing increasing numbers of disasters all over the world, which pose huge logistical challenges. Drones make it possible to transport all kinds of goods much more quickly, safely, and effectively, thus helping to save lives.’ The Ministry of Defence and various players in the aviation sector have already expressed interest in the Silverwing. The team first built a half-scale prototype and then a full-scale prototype, which has undergone testing in recent months. The design team shows the very first taste at Amsterdam Drone Week. The makers will showcase their creation to the world for the first time on December 11th.

Best inventors
Visitors to Amsterdam Drone Week will be able to see aerial vehicles that are attracting a great deal of attention internationally. Both teams from Delft University are competing for the GoFly Prize, an international competition sponsored by Boeing (founding partner of Amsterdam Drone Week) that attracts the best inventors, students, designers, and innovators from all over the world. The goal is simply to design and build the ultimate single-person flying machine. The vehicle must be easy to operate, ultracompact, quiet, and electrically powered. The noise level may not exceed 87 dB, comparable to a slowly moving train. Another requirement is vertical take off and landing. The entire competition consists of three stages, and the Silverwing has already won the first two stages with flying colours, putting it in the top-5 of the 700 teams competing. The final fly-off will take place in Silicon Valley, USA, on 29 February, where the contestants will have to showcase their machine’s flying skills. The prize for the winner is $1 million.

Registration
Journalists are invited to report on Amsterdam Drone Week. Accreditation for the event is possible via this link.

About Amsterdam Drone Week
The second edition of Amsterdam Drone Week from 4 to 6 December will make RAI Amsterdam the most important global venue for exchanging knowledge and expertise on current and future air mobility solutions, innovations, and essential regulations. It will be the meeting point where all top-level players, large and small, commercial and non-commercial, from various industries, knowledge institutes and authorised bodies will come together. The central theme will be, ‘How can drones best be integrated into our airspace and how can urban areas best respond to these new developments?’ For more information: www.amsterdamdroneweek.com. 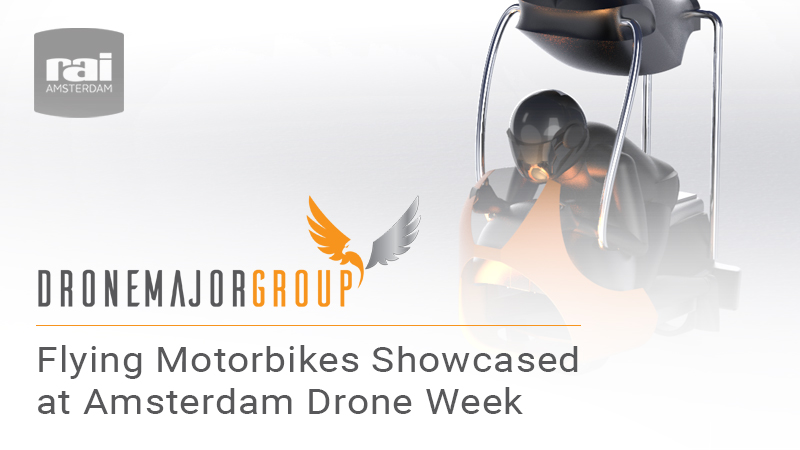 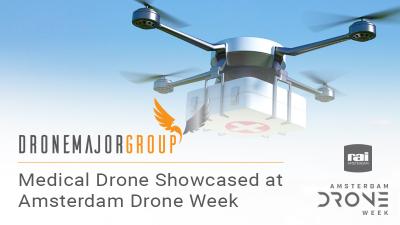 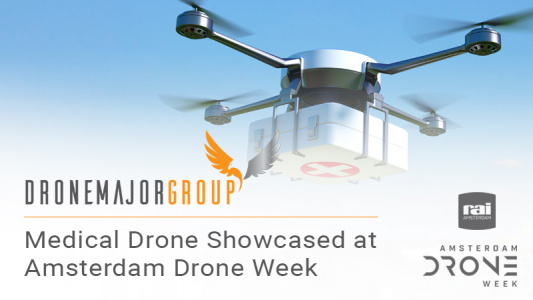 KPN provides communication data links for test flights  The prototype drone used for trials with medical drones will be showcased at the Amste...