FROM EXCEL TO EXCELLENCE

The story of how one Co-op turned 3000 images in Excel into actionable insights about their assets.

“Successful people don’t keep up. They stay ahead.” 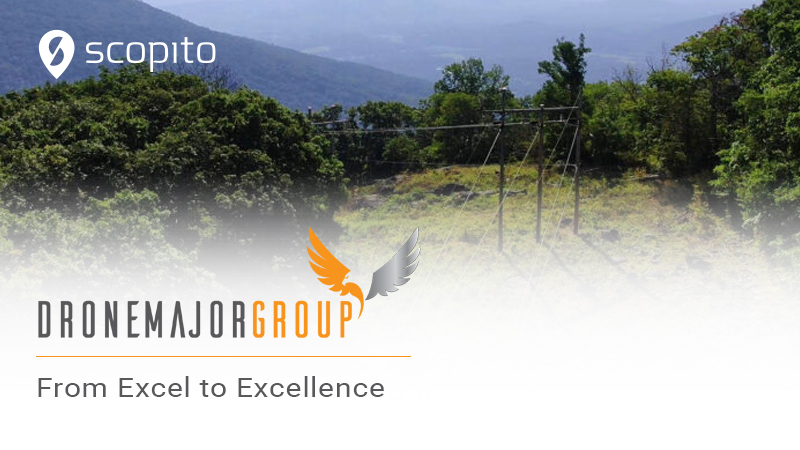 Into the realm of drones

Curtis Marshall first ventured into the realm of drones through a volunteer program. His local public safety agency researched drones for search and rescue missions, HVAC thermal imaging, fire aid, and the likes.

The drone-fever hit Curtis hard. He read everything he could get his hands on. He just wanted to learn, learn, learn.

Eventually he knew a lot about drone technology. He knew so much, in fact, that he decided to try and make some money from it.

Curtis started his own business and went for his first tender.

“I quickly realized that the amount of data we would acquire was way too much to manage. At least in any way that made sense.”

After reaching out to his Facebook community, he got in touch with Dani for the first time.

“I saw a demo and fell in love with it. With the concept. I signed up for a subscription, and eventually the relationship developed into me working for Scopito today.”

Today, Curtis spends his time on Scopito tasks, as well his growing business; Altitude Imaging. He recently won a project with a big electric cooperative.

“Last year I tried to get this Co-op to choose us, but they went with another vendor.

Eventually they got 3000 images on the thumbdrive, and a 1000-line excel-sheet with issues. No annotations. Nothing they could understand.”

Then they reached back out to Curtis.

“I knew I was going to provide a lot more usable data than the other company. They only delivered 3000 images, and I ended up with more than 4500.“

This fact initially put off the co-op, and they were hesitant to accept.

“The decision maker was hesitant at first, but when I showed him how the data was structured, he was flabbergasted. He loved it – the paper-reports, the access to the web. All of it.”

Because the data was easily filterable, Curtis was able to help his client understand the full value and usability of the data managed in Scopito, as compared to the co-op’s previous inspection.

Put it on paper, please.

When the topic fell on delivery, Curtis’ new co-op client told him:

”I want a paper report. I want to see the issues, where they are and what they are. I want it to be properly annotated and know the GPS-coordinates.

I know this is probably impossible for you to do..”

“Nah, not really.” was Curtis’ response, as he pulled up his Scopito report.

“Showing people that there is a better way to manage their data is a challenge. But it’s also fun to actually open their eyes and see how they react, when I do a demo. It’s just one of those cool things.”

Properly managed data is gold for your business.

Don’t postpone what you should have done yesterday. Get in touch with Dani.